The first thing you notice is the buzzing. It turns out a “drone rodeo” sounds like a swarm of furious hornets. Then, over a red dirt hill of the Clark Country Shooting Complex in the middle of the Mojave desert, the drones become visible as they rise. And dip. And race.

Of the several companies and individuals exhibiting their drones at the unofficial CES extension event, 3D Robotics lays claim to one of the most commercially accessible drones on the market.

“We’re at Best Buy now, so we’ve kind of made it,” says Micah Barbatos, an account manager at 3D Robotics (3DR). The company recently launched its Solo Smart Drone in June and has seen an increase in market momentum since the debut. “It’s full-blown retail now. It’s definitely not hard to find.”

Barbatos says the Solo is built for the everyday consumer. The controller is sleek and simple and reminiscent of an old-school RC airplane controller. The two joysticks move up and down, left and right to control altitude, distance and yaw (twist), and the visual feed from the onboard camera makes navigating relatively easy.

The GPS locating system is a big help for first-time drone users. It allows the drone to stabilize itself in gusts of wind and rain. But the controller, while visually minimalistic, also holds a 1 GHz computer with its own processing power. Barbatos claims it’s the first of its kind.

“The thing a lot of people don’t realize about most drones — when they get the bug and they want to go buy one – -is that flying robots is really hard,” Barbatos says. He says that the Solo is designed to capture camera footage for amateur cinematographers or anyone looking to produce high quality photos regardless of whether or not they have experience flying drones.

“What sets Solo apart is essentially you can fake it till you make it,” Barbatos says. “You have the ability to look like a pro out of the box without having to put in two years of practice.”

But, while drones are becoming more commercially available, the stigmas attached to them persist. Historically, unmanned aerial vehicles (UAVs) have been associated with spying, war and remote bombing. The official Federal Aviation Association (FAA) safety guidelines reflect this public unease advising drone users to: remain below 400 feet, not fly near people or stadiums and not fly within five miles of an airport. The one fear that the FAA doesn’t address, however, is privacy.

“I think the privacy concerns people have with drones is just silly,” Barbatos says. He says the sound alone is enough to warn anyone in the area that the type of drone he operates is approaching. And without a zoom function on the camera, closer shots necessitate closer flying which Barbatos says makes the Solo that much more noticeable.

“It’s just not a tool for spying like a lot of people would initially imagine them to be,” Barbatos says, “It’s not like some sort of James Bond type of thing.”

And Barbatos says he thinks drones will outgrow these stigmas. “I’ve heard some of my colleagues say, ‘well when the Model T hit the streets, all of the horses had to get out of the way.'”

“It’s just one of those things, it’s new, we don’t fully understand it yet…but people will come around,” he explains.

Although, with a retail price of $1,000 they might not be flooding the market just yet. But Barbatos remains hopeful. “I see a future where we’re gonna see just lines of drones in the air and it’ll be like ‘oh it’s a drone highway.’ It’ll be that common to us.”

LAS VEGAS—The California Legal is a simplified drone made with an exoskeleton of wooden dowels and PVC, at the Drone Rodeo at CES on January 5, 2015. It is easily fixable and because of its simple parts it is only about $100. (Ann Singer/ BU News Service) 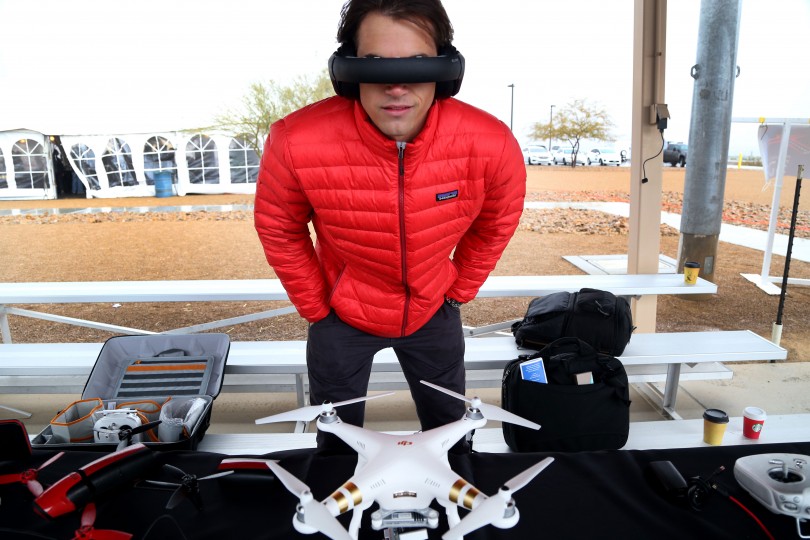