"Joe Biden" by Gage Skidmore is licensed under CC BY-SA 2.0

A ruling by the 8th Circuit Court of Appeals temporarily blocked the Biden-Harris Administration’s Student Debt Relief Plan from continuing, not even a month after applications for the plan opened. The blockage was in response to an emergency motion imposed by attorneys from six Republican-led states. Since then, other litigations have imposed further problems on Biden’s plan, which would forgive up to $20,000 in student debt for eligible Americans.

U.S. District Judge Mark Pittman froze applications for the plan Nov. 10 after filing court documents that declared the plan “unlawful” because Biden did not follow federal procedures that allow for public comment prior to the announcement of the plan. 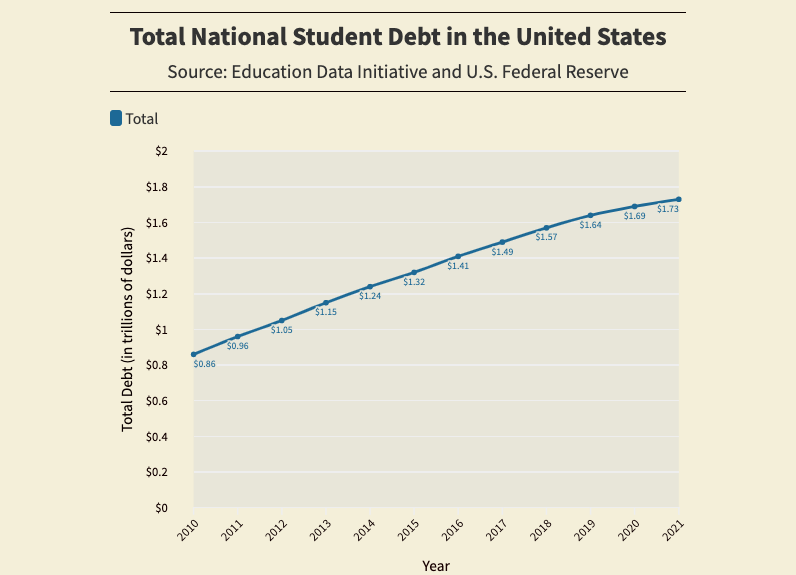 Around 26 million people applied to the debt forgiveness program by the time Pittman froze the program. The government has stopped taking applications as litigations continue. The Biden administration has since asked the Supreme Court to allow its plan to go into effect despite current litigations.

Approval letters via email were sent to select individuals over the Nov. 19 weekend. The approval letter stated that although certain applicants were approved for the plan, the current litigations have “blocked our ability to discharge your debt at present,” said U.S. Secretary of Education Miguel A. Cardona in the email.

Over the span of about 10 years, American attitudes towards college funding shifted, according to Brian Powell, a professor of sociology at Indiana University. Recently, a majority of people think that higher education should be funded in collaboration between the government and the families of students. Back in 2010, the majority of Americans responded that it was the responsibility of parents and students.

Powell said this shift is likely due to increased recognition of higher education’s effect on American society, as well as rising tuition costs.

Recent research found that more people are in favor of some form of loan forgiveness than are opposed, according to Powell. The debate is no longer about “no forgiveness versus forgiveness,” but about who should be forgiven and how much “real shift” will occur as a result.

“One view is that we should provide debt relief for the people who need it the most. Usually, that discussion is more based on income,” said Powell. “The other cluster of people say that debt relief should be a benefit for all.” Research shows more people are in support of the second cluster.

Student loan debt affects family formation, net worth, home ownership and the way students view the return on their degree, said Melinda Lewis, a School of Social Welfare professor at the University of Kansas. Lewis said that these effects vary across socioeconomic status, race and ethnicity.

“Students of color and students from low-wealth family backgrounds tend to have higher default rates and slower repayment rates,” said Lewis. Taking a longer time to repay student debts means “the return on that degree erodes or is delayed at best.”

A degree’s return can give students the ability to build assets toward lifelong financial security, according to Lewis.

Student debt often distorts a student’s decision about what career to pursue in college and their decision to continue to graduate school. “Students will usually pick a career that will allow them to reap the most economic benefits,” said Lewis, “which in some cases means going against a career that they will be a better fit in.”

Both Lewis and Powell agree that financing higher education is a problem that goes beyond student loan debt forgiveness.

“Forgiving loans are temporary,” said Powell. “It’s a band-aid that doesn’t solve the core problem.” Free or reduced tuition without restraints on universities is “something that the public really was buying into,” he said.

“I think that Biden’s decision was excellent,” said Ellis. “It is a way of transferring money to lower-income people, so it has equity improvements, and it will increase the consumption of that group who is suffering the most.”

BU alum Daniel Li, who graduated this past spring, was eligible for Biden’s plan, among other existing loan forgiveness plans. With almost the entirety of his loans forgiven, Li felt free to pursue a career “without the pressure of paying the loans off as soon as possible,” he said.

“It’s opened up my horizons and given me the chance to find my dream path,” Li said. “I’m grateful I made it through that window of opportunity.”