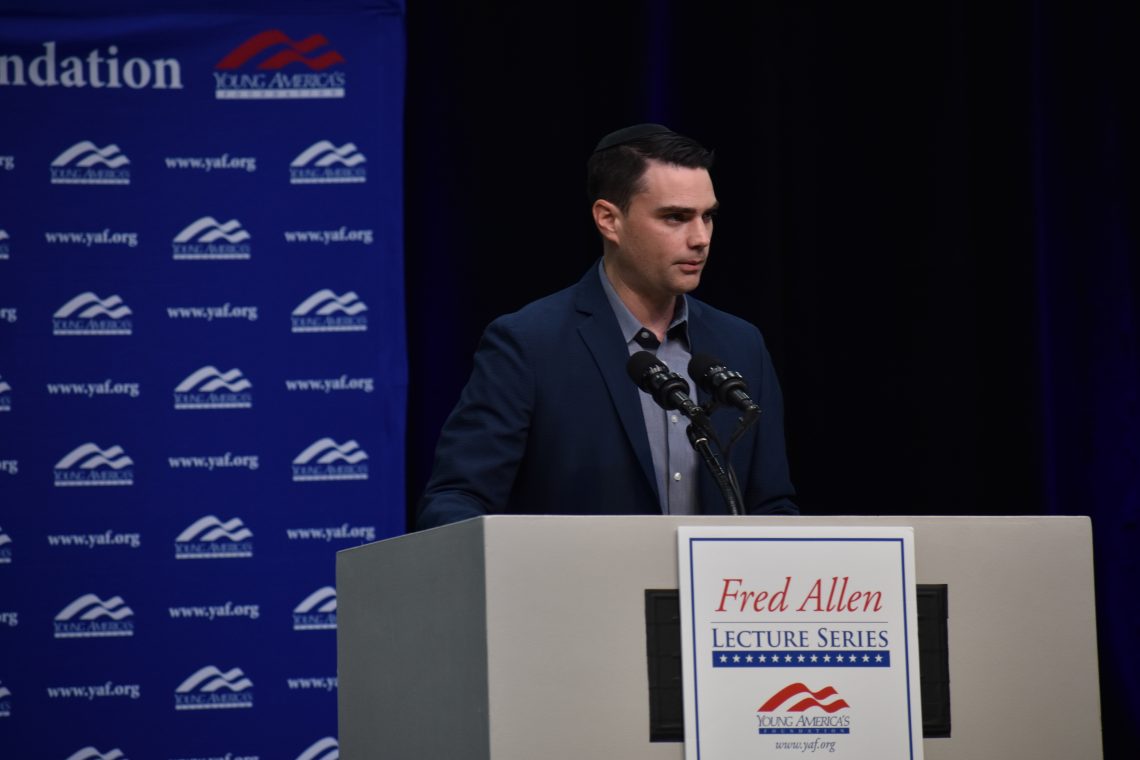 BOSTON — Winds lowered the temperatures to the teens Wednesday night, but that wasn’t what loomed over the heads of Boston University’s students. The night was the coldest Nov. 13 on record, but students were focused on the history being made in West Campus.

Ben Shapiro, a name that has floated above the heads of BU students for the last three months, spoke in a sold-out venue for about 1,500 people. The conservative Daily Wire founder and editor-in-chief was invited by the Young Americans for Freedom (YAF) Boston University chapter earlier this semester to hold a lecture about his beliefs, similar to his visit to Stanford University last week.

At BU, he chose a controversial title for his speech, “America wasn’t built on slavery, it was built on freedom.”

As soon as the news of his visit was announced by YAF in September, a petition called for a rejection of Shapiro and his beliefs. Right from the beginning of his speech, he referred to it with ridicule.

“Thank you to Boston University for assuring this event could happen, despite a change.org petition that people signed, and was very intimidating,” he said sarcastically among cheers and applause.

Almost 2,200 signatures were collected up to the moment he stepped on the podium.

“BU is an amazing school, illustrious alumni, including [Martin Luther King] Jr. of course, and the very, very, very fresh and very famous AOC,” he said amongst loud cheering. “To be fair, it sounds like their econ department could use some work.”

Ocasio-Cortez has pushed for a progressive platform, including Medicare-for-all, a federal jobs guarantee and a 70% tax on millionaire fortunes.

Ocasio-Cortez’s platform has been a preferred topic of debate for Shapiro, who often talks about her ideas on his podcast “The Ben Shapiro Show.” The two engaged in a back and forth on Twitter in August where Shapiro made several comments about poverty rates in the country.

“If you had to work more than one job to have a roof over your head or food on the table, you probably shouldn’t have taken the job that’s not paying you enough,” he said during his daily radio talk. “That’d be a you-problem.”

“Working people aren’t dumb or inferior,” Ocasio-Cortez responded, “nor are they why insulin costs $300 or huge [companies] pay starvation wages.”

After the comments about Ocasio-Cortez Wednesday night, Shapiro started in about the chosen title. Before the speech, Black BU had written a letter to express the effect they believe his visit would have on campus, and Shapiro officially began his speech with their words.

“If just the title of this speech makes you feel abandoned, triggered, frustrated, disheartened, infuriated, overwhelmed, ignored and embarrassed, see a doctor in four hours,” he said.

The speech was briefly halted when protesters with whistles and calls walked through the audience. The crowd surrounding them repeatedly chanted “USA!” as the group was escorted out.

“Which values represent America?” he asked later in the talk, “Racism and slavery and Jim Crow, or the freedoms posited in the Declaration of Independence and the Constitution of the United States?”

Shapiro argued the issue of racism has been treated by the Left as a definition of what the history and identity of the U.S. is. He impersonated Rep. Beto O’Rourke, D-Texas, saying “America is still racist at its foundation, at its core and throughout the system.”

Shapiro waved off any truthfulness to O’Rourke’s statement, arguing that America is “one of the least racist, multiracial countries today,” and used the election of Barack Obama as evidence.

Formerly the editor-at-large of the alt-right news service Breitbart News, Shapiro dismissed any ideological associations with the far right, after stating that he felt forced to leave the magazine.

Since the protest at Marsh Plaza on Oct. 28, Shapiro’s promotional posters were vandalized with mustaches similar to that of Adolf Hitler, the implications of which he discredited during the speech by mentioning his Orthodox Jewish background.

Almost 200 students marched to the Track & Tennis Center before the 6 p.m. rendezvous. They waited in the bitter cold to protest with signs throughout the speech. Shapiro paid attention.

“The lecture that I’m giving is almost pointless, because if America was built on slavery, not freedom, then we wouldn’t have a bunch of protesters outside exercising that freedom,” he sympathized. “And good for them.”

Shapiro returned to the topic of MLK to rebuke the statement made by Black BU, after quoting the letter once more.

Shapiro rebuked these statements with a call to cease claims of hardship.

“Your rights are fully intact. Those of your ancestors were not. Stop conflating the past with the present, or the tremendous, unforgivable evil done to your great, great, great, great, great grandparents with your experiences today in America. They are not the same.”