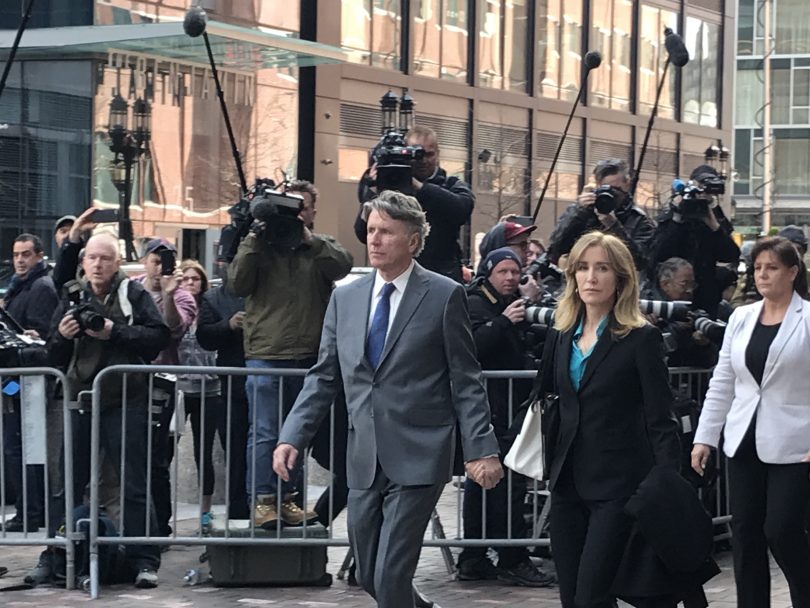 Boston — Hollywood stars Felicity Huffman and Lori Loughlin appeared in federal court in Boston on Wednesday to face felony charges in the wake of the recent college admissions scandal. The actresses, alongside other wealthy parents allegedly paid a consultant, Rick Singer, who rigged test scores and issued bribes to cheat the admissions process at several elite universities.

Loughlin’s husband, fashion designer Mossimo Giannulli, who is also charged, sat alongside her in the courtroom before facing the judge separately. The hearing was brief; both actresses weren’t asked to enter a plea and they remain free on bail. Loughlin’s passport had been turned over to her pretrial supervisor in California, her lawyer confirmed to U.S. Magistrate Judge M. Page Kelley, as the international travel is prohibited unless under admission.

Judge Kelley rejected a request that parents are not allowed to talk to family members about the case at the beginning of the hearing, saying it’s not realistic. The prosecutor also stated it would be “problematic” because the children are “potential witnesses.”

“I don’t think it’s outlandish. I do think it’s unmanageable,” Judge Kelley said, and she added that she would admonish the parents to talk to their lawyers about obstruction of justice.

Both Loughlin and Giannulli waived their right to a preliminary hearing. They signed bail condition and left the courthouse shortly after. The actresses didn’t make eye contact or ak to one another in the courtroom, and neither of them publicly commented on the allegations when surrounded by amount of media outside of the courthouse.

Loughlin waved at her fans before hustling into a SUV, according to her supporters Alyssa Stevens and Liana Ferrara, who held Loughlin’s cutout photos outside the federal court to support. “We grew up watching ‘Full House.’ We really love Lori Loughlin,” said the two college students, who had been in front of the courthouse since 11:30 a.m.

Felicity Huffman, who appeared in “Desperate Housewives,” is charged with paying the admissions consultant at the center of the scheme $15,000 to have a proctor cheat her daughter’s SAT exam. Lori Loughlin, known from the sitcom “Full House,” along with her husband, is accused of paying $500,000 to get their daughters admitted as recruits to the USC crew team, even though neither is a rower.

Both actresses and others charged in the scandal could face up to 20 years in prison if convicted. The proceedings came three weeks after 50 people were accused of taking part in a scheme in which parents bribed coaches and helped rig test scores to get their children into prestigious universities, including Yale, Stanford, and the University of Southern California. It was the biggest college admissions scheme ever prosecuted by the U.S. Justice Department.

Fifty-three-year-old packaged-food entrepreneur Peter Jan Sartorio from California became the first of 33 parents who will plead guilty, said court documents filed earlier Wednesday. Sartorio is accused of paying $15,000 to have a person pretending to proctor the ACT college entrance exam for his daughter and correct her answers. Among the other parents in court Wednesday was Gordon Caplan, former co-chairman of an international law firm, and John B. Wilson, a 59-year-old investor is accused of paying $220,000 for his son’s admission in USC in 2014 and $1 million last year to try to secure spots for his daughters at Stanford and Harvard.

William Rick Singer, the consultant at the center of the scheme, pleaded guilty in March and is cooperating with investigators. Yale University’s former women’s soccer coach Ruth Meredith also pleaded guilty for taking bribes in exchange for admitting applicants were recruits, even they didn’t play competitive soccer.