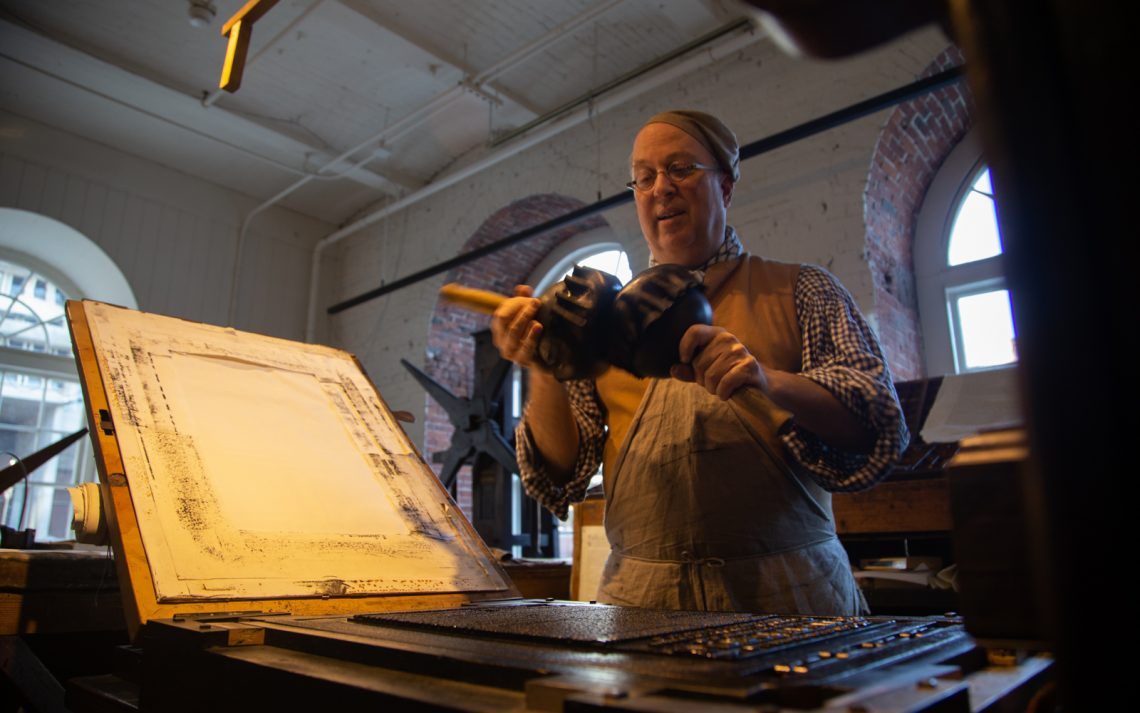 BOSTON — Tucked between modern-day stores selling tourist tchotchkes and mass-produced items is something antithetical to it all: The Printing Office of Edes & Gill, a small shop in the city center reviving the nearly lost art of the printing press.

“There’s no better place on earth for me to be than here at Faneuil Hall,” says Gary Gregory, 59, wearing colonial garb and eighteenth-century spectacles. He is the owner and print master who first opened the store in 2010 in the North End but relocated in 2018.

The shop gets its name from Benjamin Edes and John Gill, two printmakers who published the Boston Gazette from 1755 until the start of the American Revolution.

Through the window of his corner shop, Gregory can see the spot off Court Street where Edes and Gill once worked—a historic coincidence he only realized his first day working at this new location.

In the small 840-square-foot space, he has made a home for his self-curated history collection: a 1949 reproduction Gutenberg printing press from Colonial Williamsburg, a copper rolling press from France, one of only four left in the world, and tall chests for his upper and lowercase moveable type. He has another 70 cases at home in his detached garage.

In isolating museum glass cases, these arcane objects might fail to engage the public, leaving visitors confused and perhaps uninterested in how they work. With Gregory, one need not wonder. Visitors don’t read placards, they listen and watch as he enthusiastically illustrates the history of printing (and recites the opening of the Declaration of Independence) with encyclopedic knowledge.

“A, N, E, D,” Gregory says, pointing to slots within the type cases in quick succession. “This is my keyboard. You don’t need good eyesight to do this, it’s all about memory.”

In three hours, he gives ten, if not more, demonstrations. If there are one or two interested passersby, Gregory will grab his specially made 100% cotton-linen paper and bring it to the press for the show. It doesn’t take long for a crowd to form.

“Where are you from?” Gregory asks as he primes two coconut-sized leather balls with an eighteenth century ink formula. The leather sounds as though it’s coated in a slightly dried honey—resistant to pull apart after each smack together.

The balls are filled with wool, over which leather is nailed into wooden handles. They are contemporaneous with the fifteenth century Gutenberg press and were used until the 1820s, at which point ink rollers were invented, explains Gregory.

“The historical context was incredible. To find out [ink balls] were used so recently is hard to fathom,” says 61-year-old Sarah Tucker, a visitor from Florida.

Gregory coats the moveable type as he talks about the Boston Declaration of Independence, the document he’s printing today. “The 9,000 characters here is a seven-hour job,” he says to the audience’s amazement.

“I saw it was a printing press, wanted to learn and then got a fabulous history lesson,” says Laura Kehoe from Watertown. “He was very engaging. If I had a history teacher like that, I would have enjoyed history.” 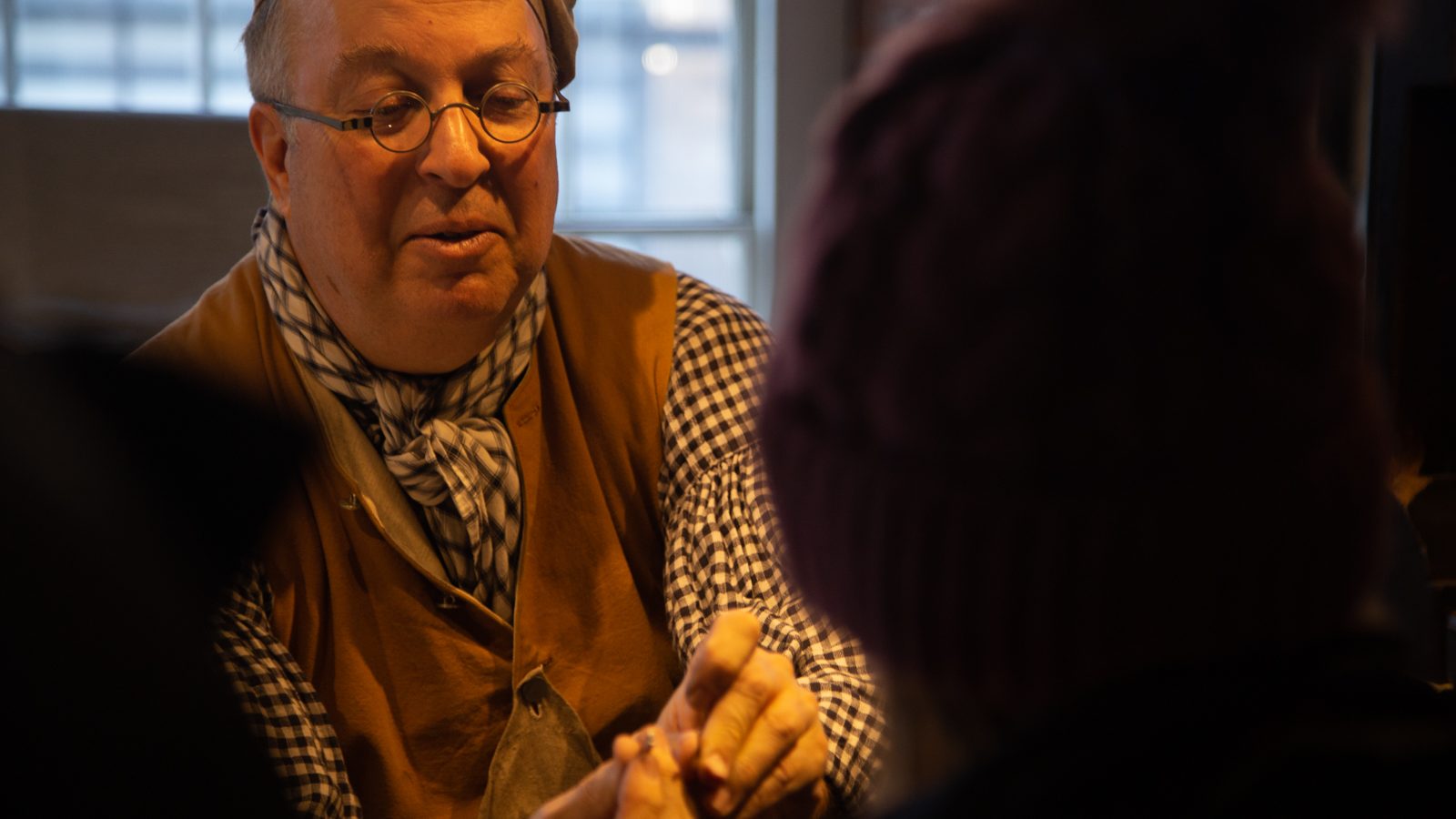 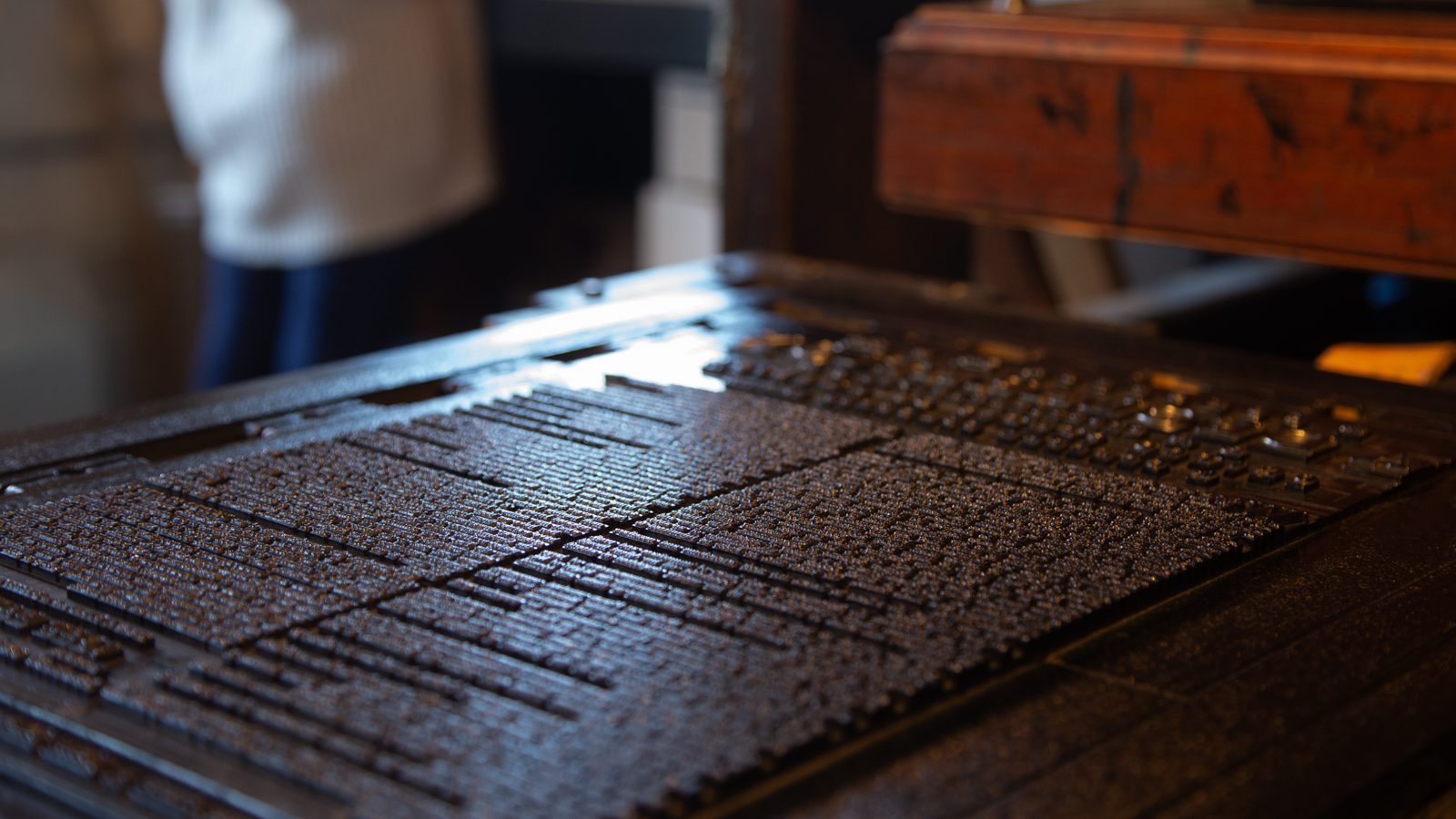 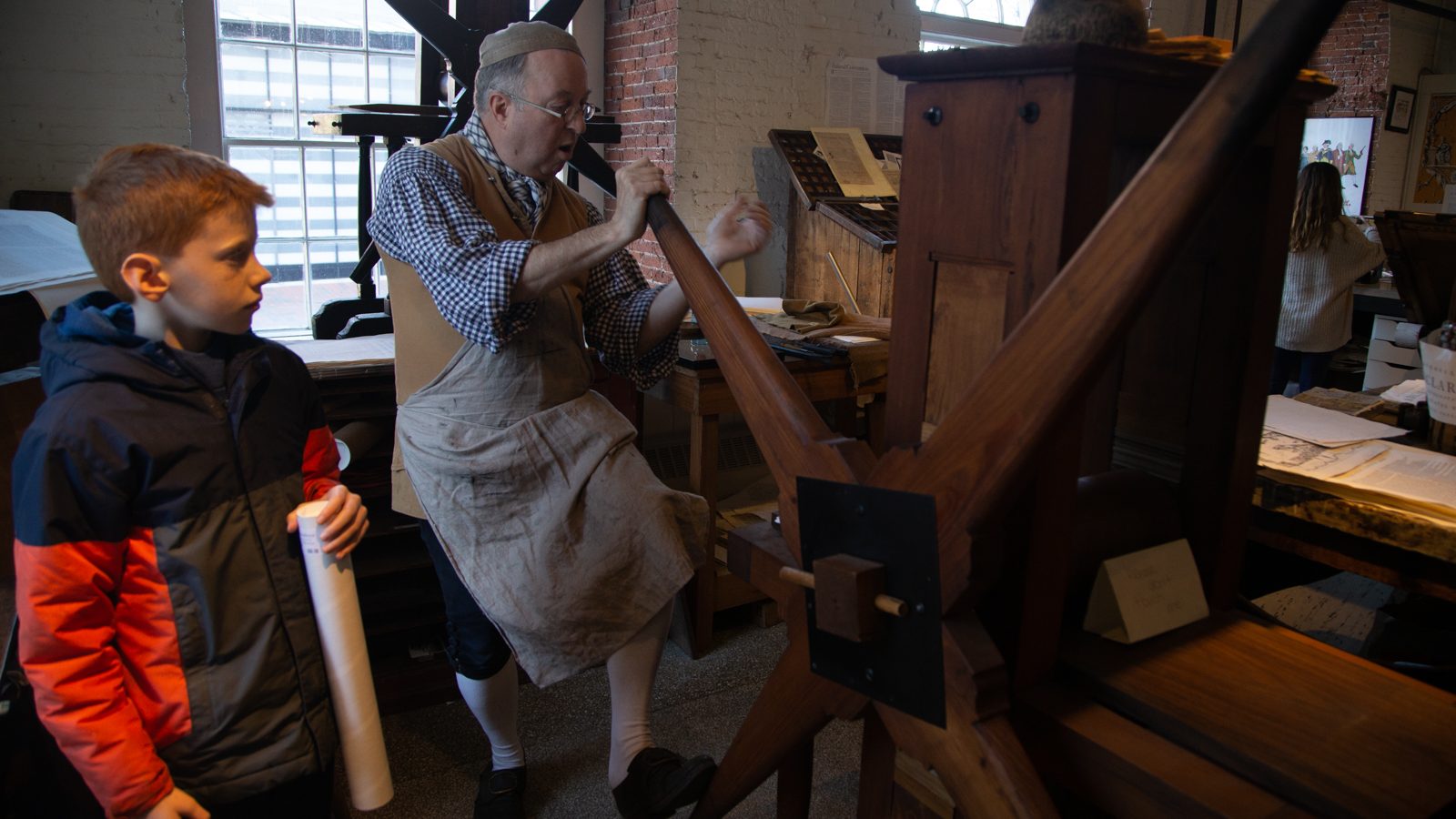 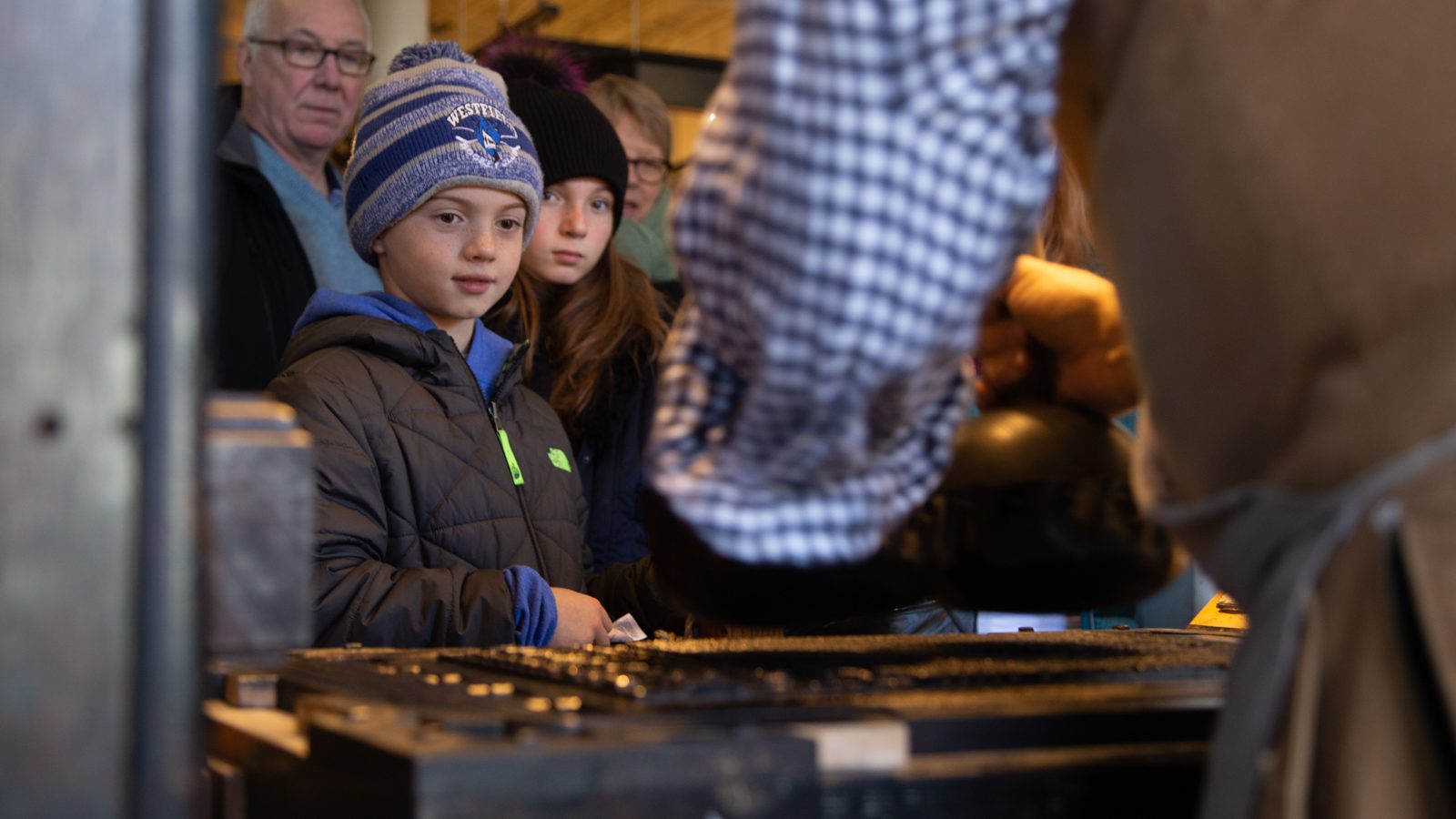 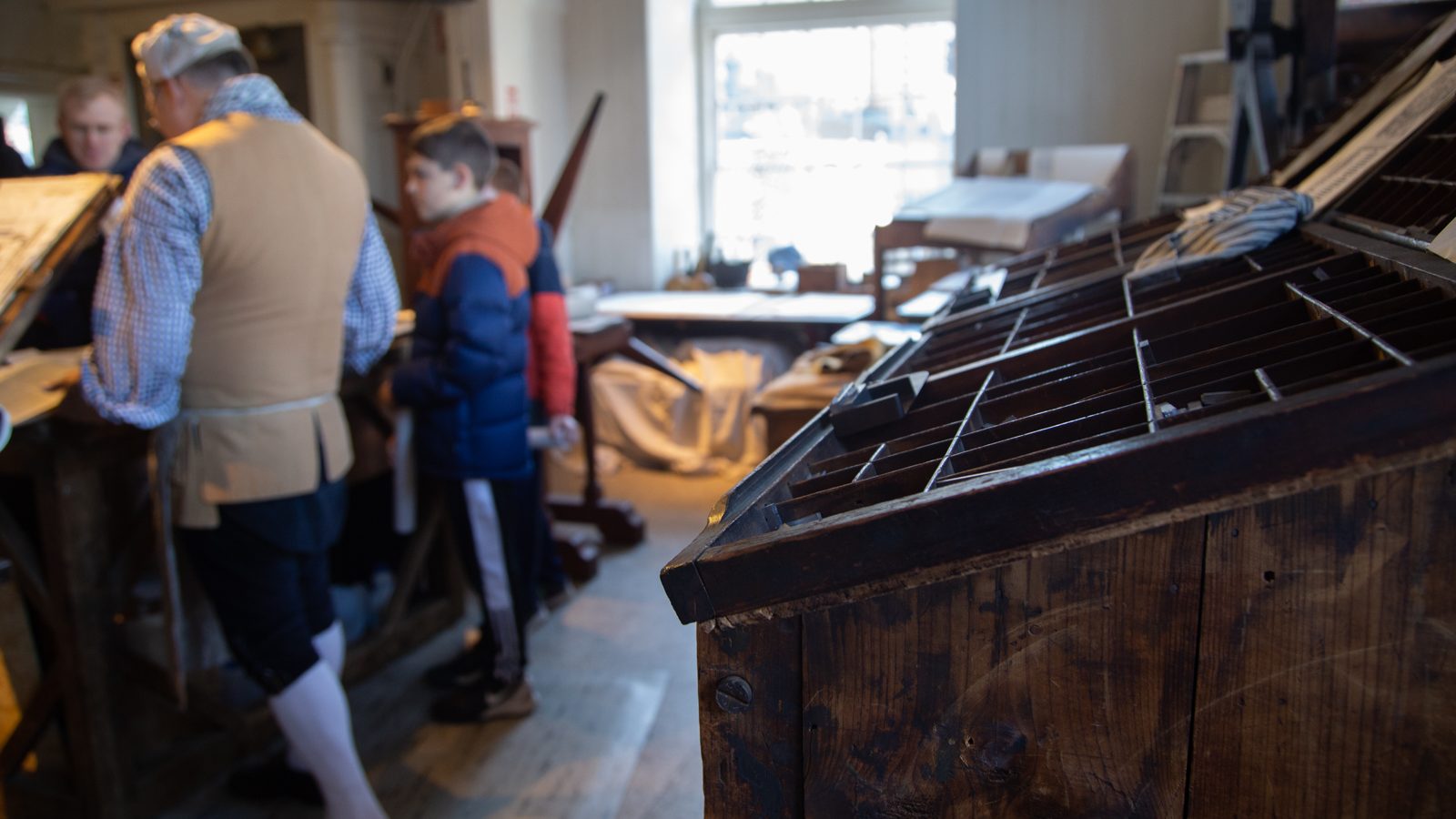 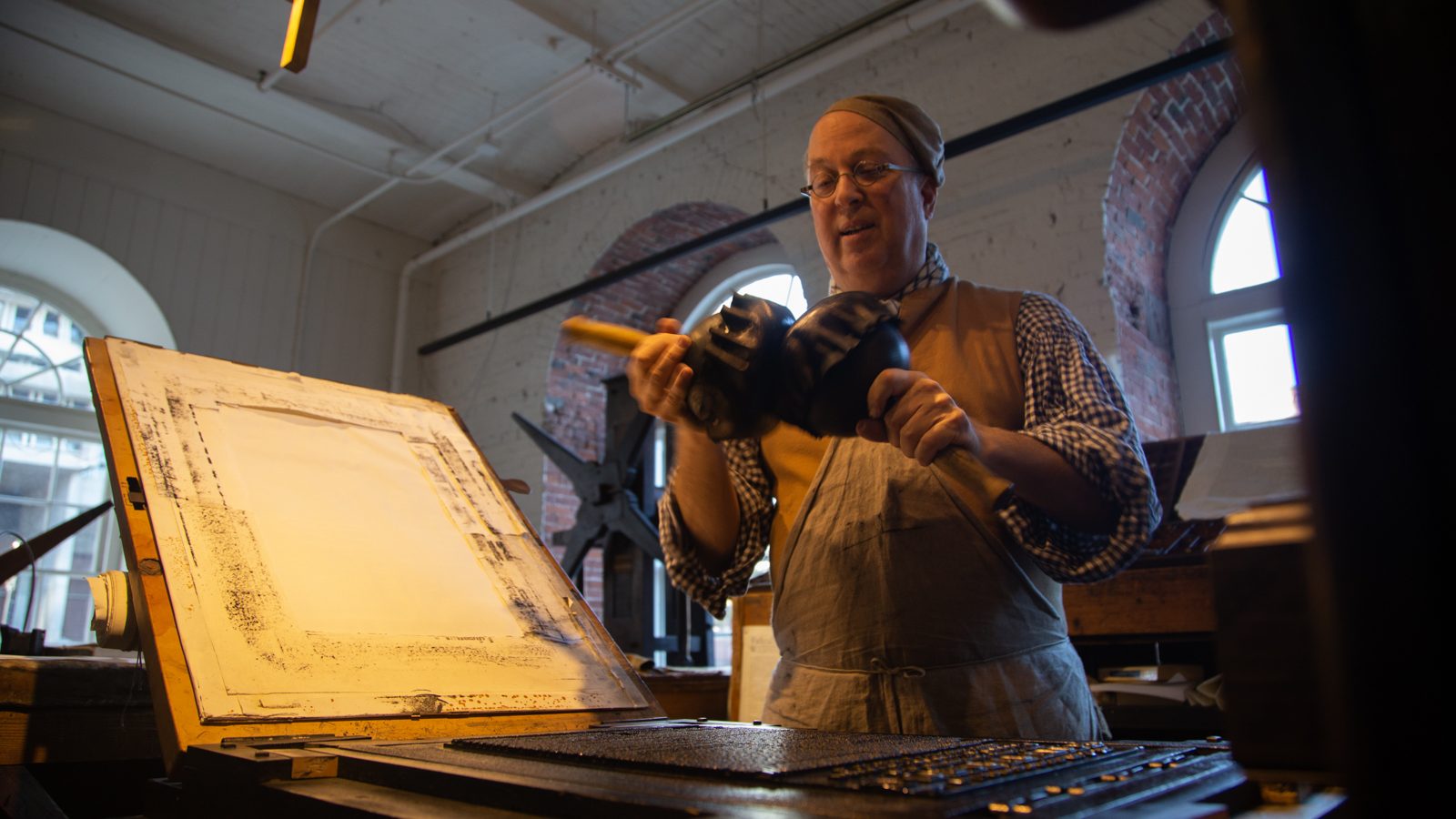 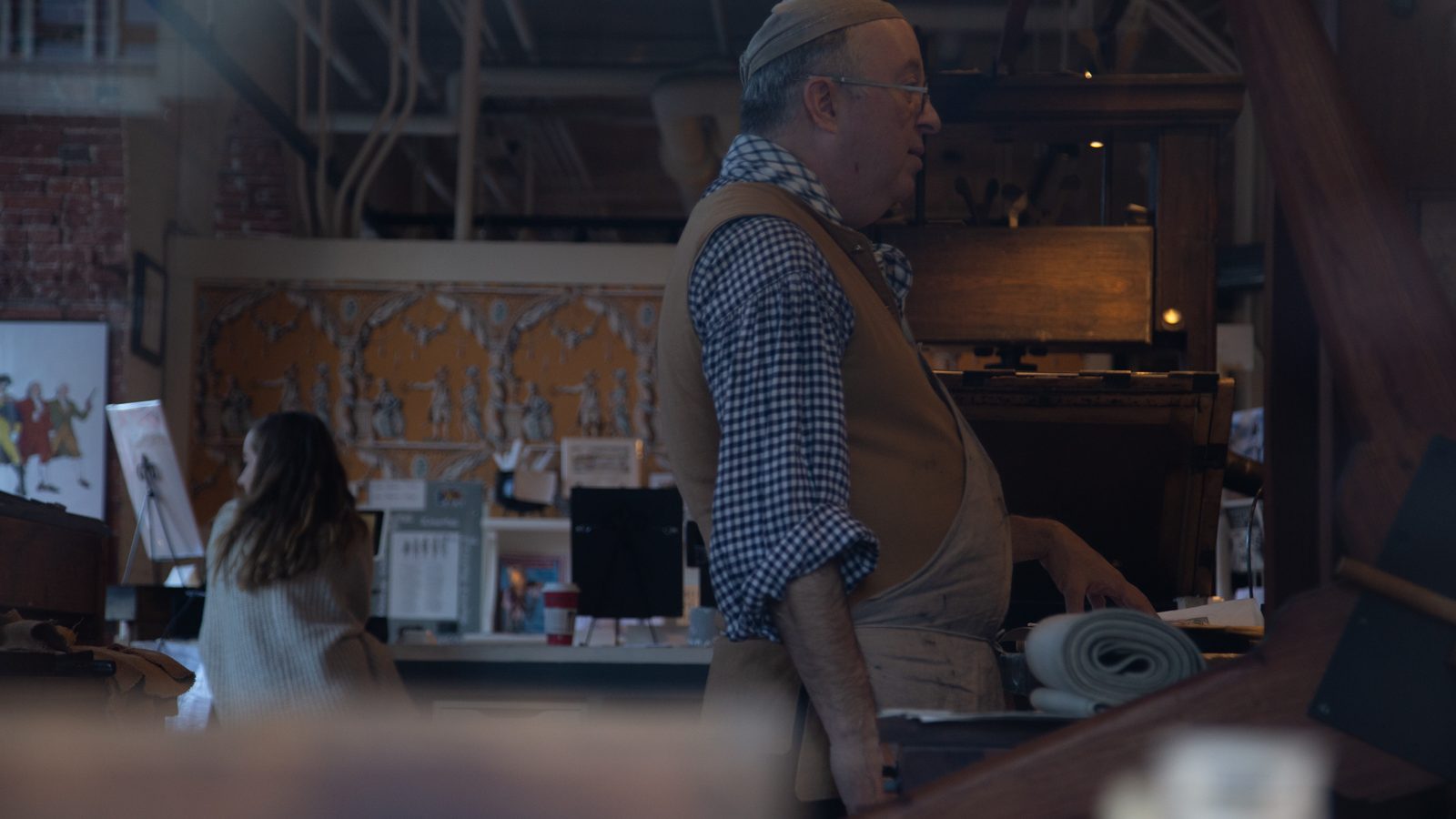 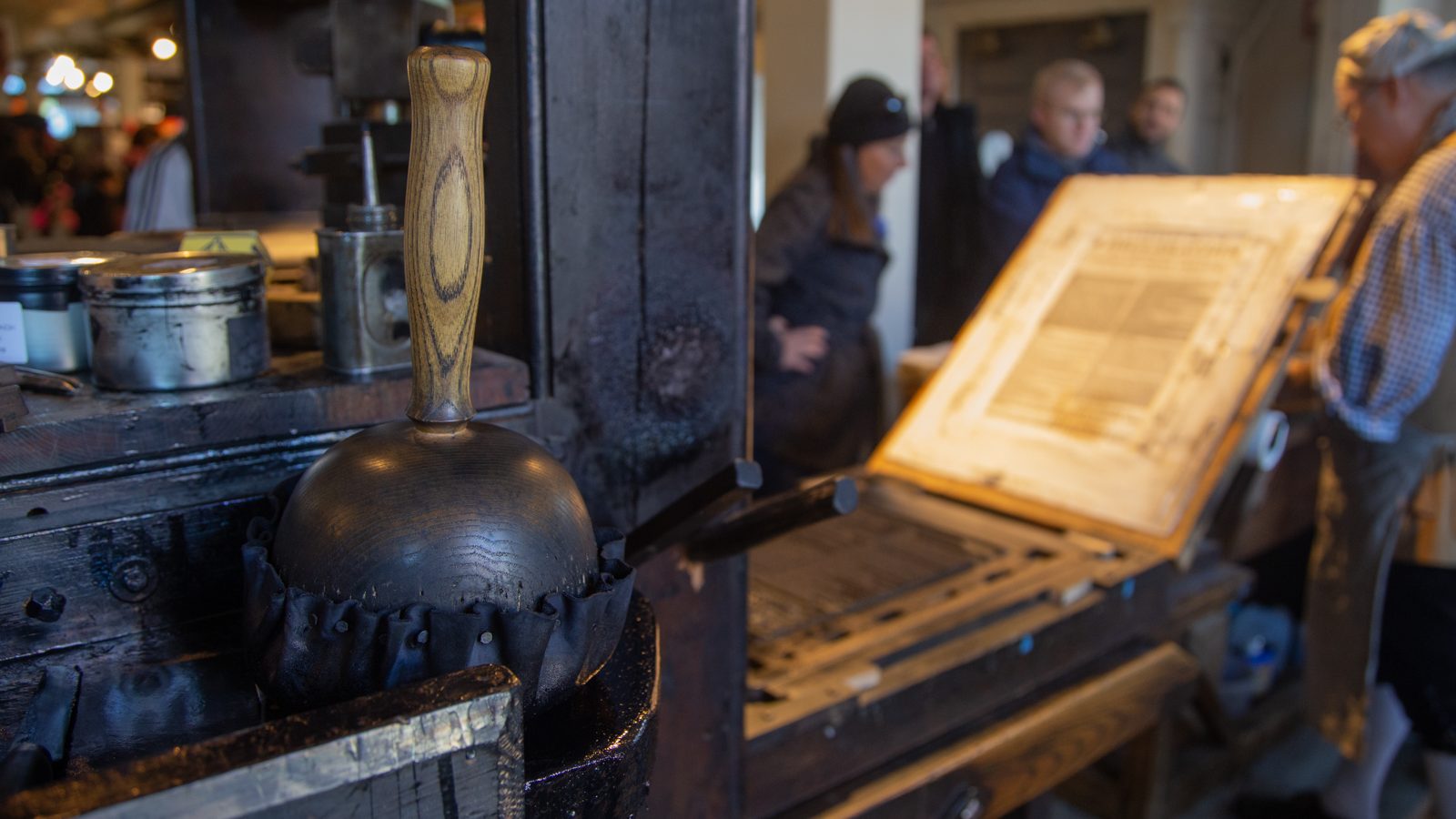 If you’re interested enough, you may be asked to cross over the small rope barrier and have a turn. A pair of brothers, 10 and 12—coincidentally the ages of press apprentices in the 1700s—take turns.

Gregory gently places the paper and board to which it’s affixed on the coated type. The boys crank a wheel to a halfway point marked with blue painter’s tape. Then, right foot forward, left foot back, reach with left hand, grab the lever, place both hands on end of lever, and lean back with full body weight as the press stamps the inked type into the soft, dampened paper. Release. Repeat.

A pair of press workers typically made 2,000 prints a day, which meant 4,000 pulls of the lever, Gregory says. He then resumes control and cranks the press out for the reveal. Many in the crowd release an audible gasp when he lifts the board from the type.

The boys pose for a photo and take the print home as a gift, much to the delight of their mother who filmed it all on her smartphone. “You can get the original for $800,000, or mine for $17.76,” Gregory jokes.

The shop is an experience one might be hard-pressed to find elsewhere. The French rolling press is one of four in the world and belonged to the studio where Pablo Picasso made engravings, according to Gregory. It sounds worthy of a museum collection, yet it sits an approximate twenty feet from bright metallic keychains and plastic souvenirs from the neighboring store.

“I’ve never seen a letterpress, especially in such a public place,” says 19-year-old Isabella Getgey, a student at Tufts University who is taking a typography class. Gregory invites her to try the press as he shares his knowledge with Getgey and her parents. “It’s such a visceral experience to touch something historical and so important for everything.”

If passion were the only indication for the longevity of a business, Gregory’s shop would be around a long time. “If this wasn’t his job, he’d still be doing this every day,” says 20-year-old Bryn Gregory, his daughter who works the register. “He’s my dad so I hear about this all the time, but I think he really brings it to life for people.”

Gregory has read and reread books on printing and taught himself all that he knows. He does what he loves every day, all while meeting people from all over the world, which he says is his favorite part.

“If you have a desire to do something, you can do almost anything,” says Gregory.

The Printing Office of Edes & Gill, open seven days a week, is located within Faneuil Hall, just off the Government Center T stop. There is no fee to view the demonstration, though donations are welcome as Gregory’s shop is a non-profit. For more information, you can visit www.bostongazette.org/.