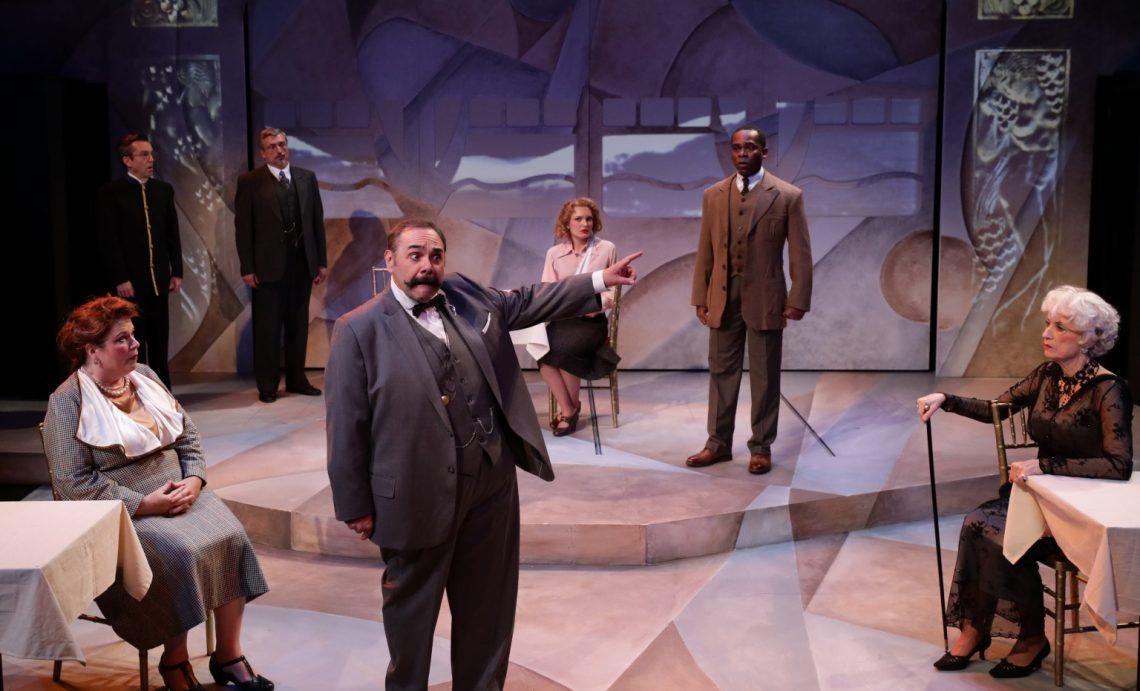 The cast of of “Murder on the Orient Express” on set. Photo by Mark S. Howard, Courtesy: Lyric Stage Company of Boston.

BOSTON — After actor and director Kenneth Branaugh’s garish, two-star film adaptation of Agatha Christie’s famous “Murder on the Orient Express,” many Christie fans may be eager to see a more authentic rendition of the mystery in Lyric Stage Company of Boston’s production of Ken Ludwig’s adaptation.

And such an accomplishment would be no easy feat. To begin with, creatives bringing the story to life must deal with crazy numbers: 15 characters, 12 suspects, nine nationalities, two luxury train cars and one iconic giant-mustached detective.

On top of this, there are already two other movie renditions of the story, one starring David Suchet, whose 25-year tenure in the role of Poirot as part of the BBC’s television series adapting Christie’s Poirot books, has made him the default image of the character for many, if not most, Christie fans.

For those unacquainted with the story, “Murder on the Orient Express” takes place in the 1930s on a luxury transcontinental train, which hosts many colorful characters from around the world in its first and second class cars.

The internationally-renowned private detective Hercule Poirot, a stout and high-brow Belgian man with a keen eye for solving puzzles, ends up aboard with the other passengers who seemingly have no connection to one another.

Then, one night, one of the passengers is found stabbed in his sleep, and the rest find themselves with a mystery on their hands.

Intrigue abounds as the victim’s secret identity is revealed, and a tragic past begins to connect many of the passengers. The solution, which is considered one of the most audaciously clever of all time, is revealed as the shrewd Poirot struggles with its moral implications.

There is no question that the acting in this production is largely exceptional. From the first second of the play, it is immediately clear that long-time Boston-based actor Remo Airaldi has a steady handle on the character of Hercule Poirot. His animated reactions and quality rendition of Poirot’s signature accent quickly shine through.

In many ways, Airaldi is a stage version of Suchet’s Poirot, with his stiff and short-gaited upright walk and uptight and delicate physicality. While some might argue this takes away from his performance for lack of originality, one can hardly imagine most Christie fans complaining.

Kerry Dowling dazzles in Ludwig’s interpretation of the brazen Mrs. Hubbard. The complex character is already enough of an acting challenge, but Ludwig adds the additional heavy-lifting of a Minnesota accent to the character.

And yet, Dowling manages the intricacies of both the character and the accent with ease. Clearly comfortable putting on a show, Dowling steals the spotlight with her commitment to her character’s crazy antics and emotional backstory.

The set design and costumes are also something to be admired. The walls and floor are beautifully painted in the period-fitting art deco style. They use fancy-looking tablecloths and chairs to help create the luxurious setting of the Orient Express. The costumes for each character are thoughtfully selected, perfectly encapsulating their unique styles and helping to contrast each one despite the large cast.

Even having so little space to work with in Lyric Stage Company’s 240-seat theater, the production manages to create five rooms: a main dining space that juts out into the audience where most of the action takes place, a moving set-piece with two rooms that can be pushed out into the middle of the stage and two alcoves on platforms raised above the side of the stage that serve as private train space and help create a sense of confinement.

But another tool the production uses to compensate for lack of space is hit and miss– their light projections. Many times throughout the play, a projector displays light onto the back of the stage, usually adding another layer of setting backdrop or playing out a film noir-style scene.

The former works well to help integrate the audience into the scene. During set changes, heavy snow is projected, reminding the audience that the characters are still stuck in a snowdrift. During scenes in the dining car, elegant wall-hangings are projected onto the backdrop, stressing the decadence of the train.

The projected scenes, however, are not so effective. The play begins with a recorded scene of a little girl, the soon-to-be-murdered Daisy Armstrong, going to bed before being abducted. The scene’s overstated film noir style sadly causes what could be a tragic moment by which to set the tone of the play to come off as merely cheesy.

Later in the production, while Poirot is revealing the solution, many previous scenes play out through the projection. Some are helpful, recalling important lines that serve as evidence that the audience might have overlooked or forgotten. Some are not so helpful, such as a recounting of the finding of the body, which the audience doubtlessly remembers and only diverts from the current action.

Overall, the production overuses projection, often causing the audience to be taken out of the scene and its tension instead of adding to it.

But the biggest problem with the show by far is its unclear and schizophrenic tone, which is not entirely the fault of Lyric Stage Company.

Much of the blame falls on the Tony and Olivier Award-winning writer Ken Ludwig, who chose to take a story that deals with child kidnapping and murder, multiple suicides and the destruction of a family based on the real-life tragedy of the Lindenberg baby and turn it into a comedy.

Many scenes in which characters are explaining past traumas are interrupted by punchy one-liners. Even the final emotion-heavy revelation scene does not escape.

This is not to say that dramas should not have comedy. In fact, it’s the most hard-hitting narratives that need it most. But good stories use comedy to provide emotional relief to the audience. In Ludwig’s case, the comedy takes away from the emotional weight of the story instead of making it more bearable to consume.

Adding to this mish-mash of tragic and comedic tone is long-time Boston-based director Spiro Veloudos’s decision to add film noir elements to the play, largely through the previously discussed projections.

In the Nov. 24 Q and A, Veloudos said he did this because he saw the elements of film noir in the story. This is not a ridiculous assertion given that it’s a murder mystery told primarily through a great detective, something common in film noir, but ultimately, like the decision to make the play primarily a comedy, it muddies the sense of loss at the center of the story.

So, is Lyric Stage Company’s version of “Murder on the Orient Express” worth seeing? Possibly, if one is looking for talented actors and laughs. But for a Christie die-hard looking for a true-to-the-text adaptation, it might not offend quite as much as Branaugh’s, but it isn’t much better.