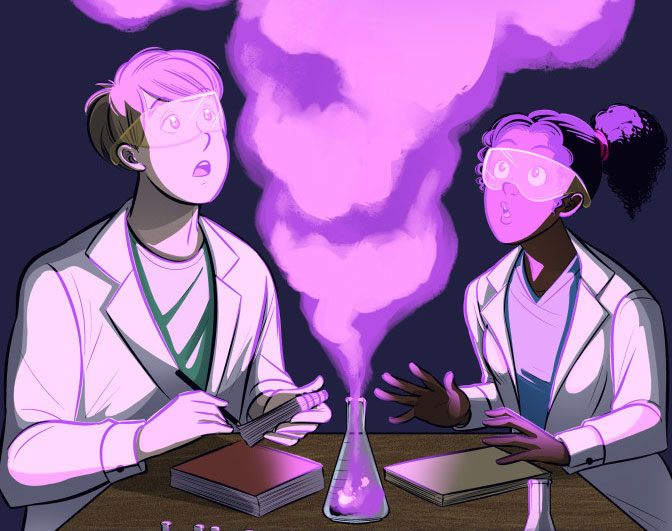 On an unseasonably warm November afternoon a small crowd gathers inside an artist’s studio in Somerville, Massachusetts. This is a meeting of the Boston Comics Roundtable, a non-profit organization that promotes collaboration among independent comic artists. These encounters are a venue for the authors to share experiences, showcase their work and get creative advice. It´s a picturesque crowd that encompasses all sorts of fashion choices: from elaborate Goth looks, to Mohawk hairstyles, to childish-looking outfits decorated with all kinds of button pins. One gentleman wears what appears to be a leopard bathrobe. In every meeting, members give presentations about their work or interests.

The Roundtable also publishes books. Their last publication is a two-hundred page volume titled “Boundless” in which forty local independent authors write and draw about hard sciences like math, physics, chemistry or biology. One of them is Olivia Li, a graphic designer by day, who says she was not afraid to tackle complex science topics despite the fact that she doesn’t have a background in science. Moreover, she and her peers wanted the book to be “educational” so people could learn a thing or two as well as “get excited” by the wonder of science. 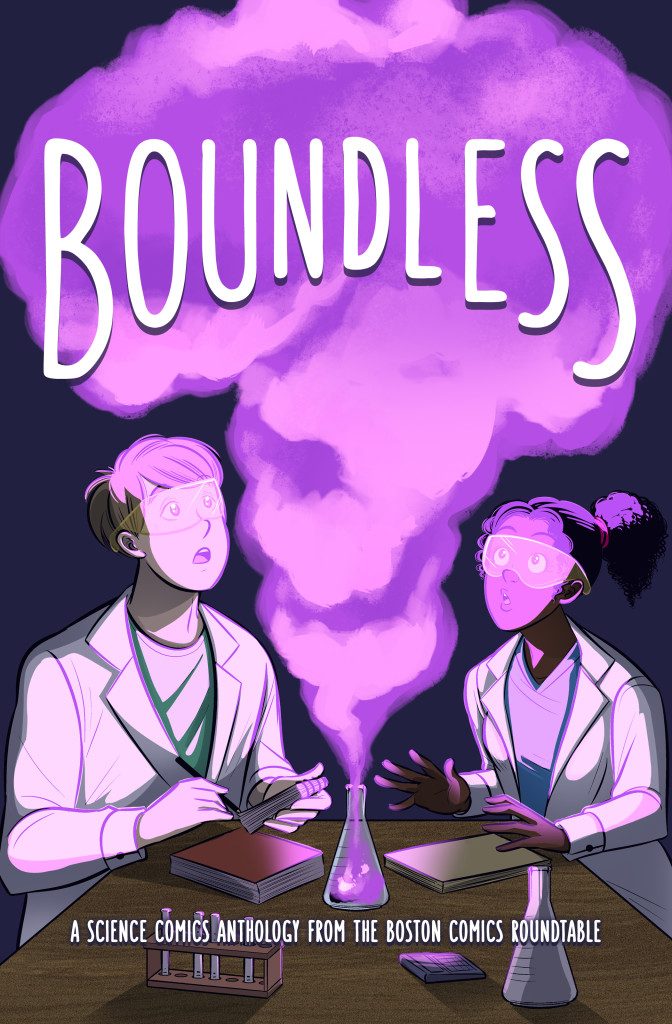 “Boundless” is a 200 page volume about science created by forty local independent authors.

“Boundless” comes at a time when traditional publishers are already flooding the bookstores with comics about science. Well-established editorial groups like Hill and Wang, Macmillan and HarperCollins are announcing new titles every publishing season. And the public is buying them. New York-based press First Second, a subsidiary of Macmillan, is producing a series of twenty books under the obvious name of “Science Comics.” After gauging the sales of the first two issues of an intended series of four – ‘Coral Reefs’ and ‘Volcanos’ – they decided to scale up. “I was kind of shocked, to be honest” says Dave Roman, the series editor. “A lot of publishers tend to be conservative and do only a couple books at a time, but my understanding is the reception has been really positive.”

The relationship between comics and science is not new. In the 1940’s comic biographies of scientists portrayed characters like Walter Reed, Louis Pasteur or Robert Koch in the likeness of superheroes, as a way to popularize scientific ideas and values. Even when it’s not the main topic, science has been present in comics as an enabler for storytelling. Either by providing a superhero with his power – usually via some freak accident involving radiation – or by giving supervillains an easy way to destroy the universe, science always seems to be part of the mix.

What appears to be new is a factual approach, in which authors pursue a deep understanding of the science and an obsession for biographical accuracy. According to Karen Green, a librarian at Columbia University, it’s easy to frame this trend in the larger context of the current boom of non-fiction literature. Yet a stigma of infantilism and levity still shrouds the medium of comics, effectively barring comic authors – until recently – from seriously addressing science. Jim Ottaviani, author of four titles listed as New York Times Bestsellers – including a number one hit with his biography of physicist Richard Feynman – had to self-publish seven books before signing a book deal with an established press. One of the publishers, Ottaviani recalls, told him “oh, that sounds interesting, l want to see that book when somebody else publishes it.”

The infantilization of mainstream comics and the relegation of adult content to the underground scene traces back to 1954 with the creation of the Comics Code Authority, an organization formed by mainstream comic publishers as a means of self-censorship to avoid government regulation. Many people blamed comics for rising rates of juvenile delinquency. The Code was a set of rules that ensured every comic would be appropriate for children – banning nudity, sex, graphic violence and obscene language and forcing crime to be presented on a sordid way. Despite not being mandatory, it enforced a practical censorship since newsstands and grocery stores – the main comic vendors of the time – wouldn’t sell anything without the Authority’s seal of approval.

During the 1980’s and 1990’s, the big comic publishers realized they could reach mature audiences by allowing more graphic and adult content. In many cases, they created imprints – subsidiary companies – to market grown-up content without compromising their more profitable franchises. This expansion of creative freedom attracted a new wave of talented authors who significantly increased the quality of the works. 1992 marked a turning point when Art Spiegelman won a Pulitzer Prize for Maus – a graphic novel about the life of his father as a Holocaust survivor – effectively opening the way for graphic novels as legitimate medium for non-fiction. The Comics Code Authority officially disappeared in 2011. 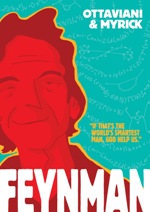 Comics are proving to be an excellent medium for science communication. They combine the need to synthesize with the ability to illustrate – especially useful when visualizing difficult concepts. Hilary Chute, a professor of English and Fine Arts at Northeastern University, stresses that “cartoonists whose work I studied are just as faithful to the truth as a writer who would publish a non-fiction book or a journalist who would publish a reported article in the New York Times.” According to Chute, cartoonists can condense their observations and personal experiences in their drawings. This allows them to be very precise in the way they present the truth.

As to why comics are getting more visibility, Columbia librarian Green points to the higher quality of the work by new authors, who are not constrained by the prejudices of the past. As a result now comics are taught in academic settings all over the country, cartoonists win national book awards, graphic novels consistently enter the lists of best seller books and peer reviewed journals devoted to comics exist. “It’s a critical mass of both talent and opportunity,” Green says.

As the genre expands, science comics are becoming increasingly common in educational contexts, both in libraries and classrooms. Some popular titles include the Max Axiom series, in which a science teacher becomes a super scientist; or First Second’s “Science Comics,” targeted to middle schoolers with a very strong educational component. Douglas Zook, a professor of education at Boston University, supports the idea of using visual representation to make information more accessible to certain students. Visual-spatial is one of the eight modalities of intelligence identified in Howard Gardner’s theory of multiple intelligences. For that reason, Zook says, in education “it’s worth trying as many approaches as possible.”

Regardless of the current boom, most authors still have to overcome many challenges to thrive. For them making comics is a work of love. “There’s not a lot of fame, there’s not a lot of glory and definitely there’s not a lot of money to be made,” says Hilary Chute. Most independent cartoonists, like Olivia Li, live off their day jobs, not being able to pay rent from their page rates. “For a lot of people it’s either a hobby or a hobby they are trying to turn into their full time jobs,” Li says.  There isn’t a clear path to success even for well-known authors like Jim Ottaviani. Despite the fact that his books can be found in every bookstore, he hasn’t decided to be a full time writer and works as a librarian at the University of Michigan in Ann Arbor. “For a long time I certainly didn’t make enough money to live from doing comics and specifically science comics,” Ottaviani says. “I have not gone that route yet.”