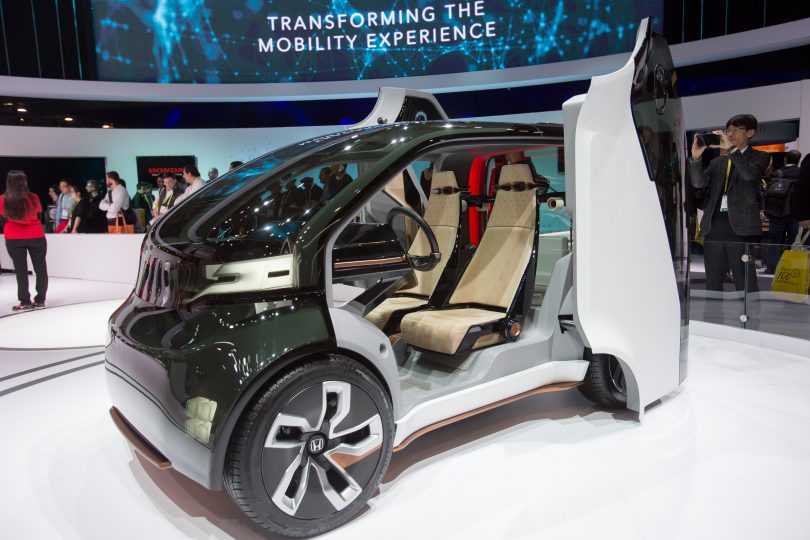 We tried a demo of the Toyota Concept-i, a concept car that uses an artificial intelligence with a personality named Yui to get to know its driver.

Following the demo, Toyota product specialist Maggie Clark said, “We’re just going to keep growing and developing the idea of AI and autonomous driving until — the overall goal is there’s zero fatalities on the road. So, until that’s achieved, we’ll keep improving.”

Toyota was, of course, not the only car company to roll out a concept car for CES 2017. Chrysler showed off its Portal concept minivan for millennials, and Hyundai displayed a fusion of home and vehicle, with a docking system built into a house to make your car into part of your living room.

Honda’s NeuV concept car, like Chrysler’s, was geared toward millennials. The NeuV has carshare features built in, allowing owners to rent out their vehicles to others.

“Basically, what we’re trying to achieve is something that, from the exterior and the interior styling, something very simplistic,” Jared Hall, advanced design group leader for Honda, said. “The reason we want to carry that throughout is just to make it something that’s more, kind of, an entry-level vehicle for future buyers.”

Though concept cars were a popular choice for automakers to display at CES, some introduced actual production vehicles at the trade show.

Nissan announced during its keynote address Thursday evening that its Leaf electric car would be able to be fully autonomous on the highway using the car manufacturer’s ProPILOT technology, though it did not give a specific date for when it would begin production of this model of the Leaf, just saying it would launch in the “near future.”

Faraday Future, the electric car company that’s trying to give Tesla a run for its money, debuted its FF-91, a fully electric SUV with self-driving capabilities.

Director of experiential marketing at Faraday Future Jason Wallace said the vehicles would be in production in 2018 and, though he could not give specific numbers, that the price of the FF-91 would be “somewhere north of 100 grand.”

The driverless technology in the FF-91 can only be used on private property, Wallace said, because legislation in place throughout the country limits what self-driving cars can do on public roadways.

“But I think we’re very confident, because the technology is there,” he said. “Once you can sort of establish that, show the data, show that it’s actually safer than people driving on their own — I think that’s going to be the tipping point,” Wallace said.

Finally, after announcing last summer it would begin producing vehicles with Level 4 autonomy by 2021, Ford displayed one of its testing vehicles at CES. A Level 4 autonomous vehicle is fully self-driving and does not have a steering wheel.

Cohen said Ford has not yet announced what areas will be geofenced for the 2021 production vehicle, but emphasized that current testing locations in California, Michigan and Arizona allow the car to understand a wide range of environmental, weather and road conditions.