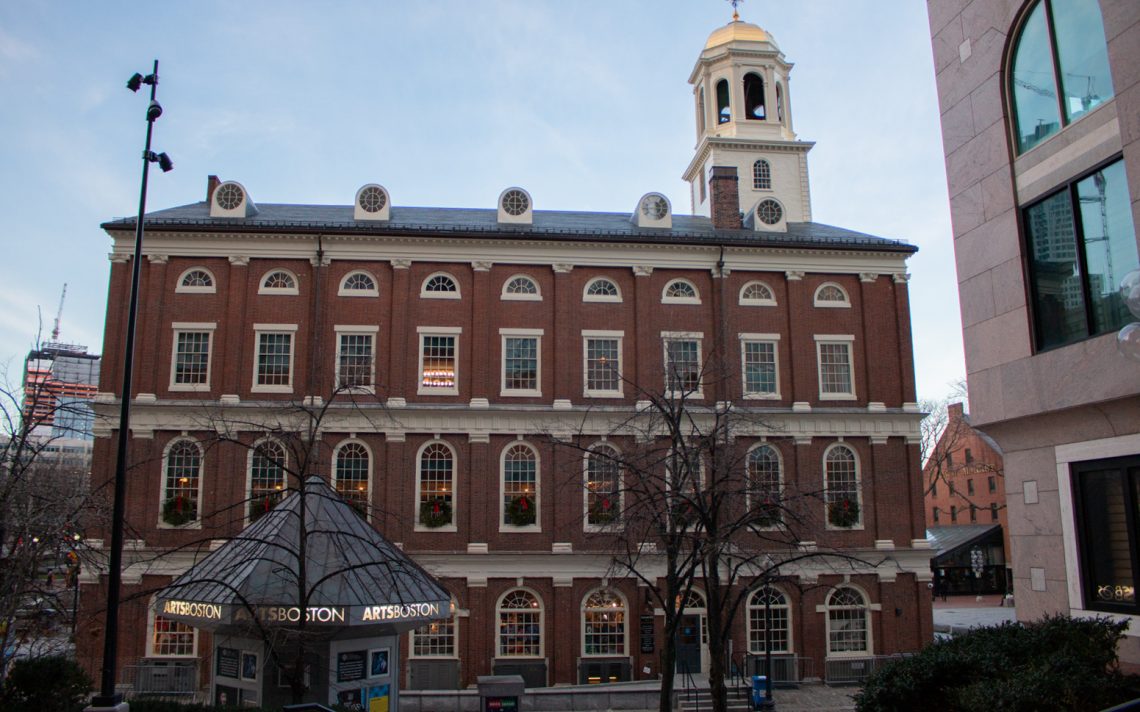 By 2100, Faneuil Hall is predicted to be flooded due to sea level rise of up to 6 feet, according to local models produced by Climate Central. Photo by Caitlin Faulds/BU News Service

Today, more than 20 million people pass through Faneuil Hall and its surrounding marketplace each year. The historic site is omnipresent in American cultural memory, its meaning wrapped up in everything the country stands for past, present and future.

But in less than 100 years, water will inch past Boston’s harbor, creep over five city blocks and come knocking at the grey and white-trimmed doors of Faneuil Hall, according to recent climate models.

The marketplace at the heart of Boston could witness a six-foot sea level rise by 2100 if worst-case scenarios prove accurate. But this wouldn’t be the first time waves have lapped at Faneuil Hall’s foundations.

Beside the Freedom Trail’s iconic bricks and underneath the feet of a bronze Samuel Adams, the old shoreline of Boston Harbor is carved in the concrete by a line that bisects present-day Faneuil Hall. Back then, the original Shawmut Peninsula, the landmass that Boston was founded on, was just a fraction of what it is today.

“Boston was kind of like a tadpole, with a tiny little piece of land called The Neck connecting it back to the mainland,” says National Park Ranger William Watson. “There were creeks and estuaries and things that flowed in all around it.”

Wharf-building was encouraged in colonial Boston with laws that extended the rights of waterfront property owners, of which there were many, down to the low tide mark, according to historian Nancy S. Seasholes.

The laws were intended to foster trade, but as Boston’s streets grew overcrowded, many took advantage to create new land. Slowly, gravel and sand were carted down from the top of Beacon Hill and dumped into the harbor Tea Party-style, Seasholes writes.

The shoreline bulged outward in stages as more than 5,000 acres of land were added — 50 acres to cover Mill Pond and connect Boston’s North and West Ends in 1807, 55 acres to build up Fort Point Channel in Seaport in the 1830s and 450 acres to create Back Bay starting in the 1880s.

Faneuil Hall sits in the middle of all this. The building was erected in 1742 by Boston merchant Peter Faneuil as a central marketplace and meeting center at the base of the newly built Long Wharf, which stretched 1,562 feet out from the mainland.

Little by little, using the lenient property laws as their basis, the land around the wharf and Faneuil Hall was filled. When the Hall itself was expanded in 1806, its footprint grew to bridge the old shoreline.

“It was actually right about here,” Watson said, gesturing towards the middle aisle of the Great Hall where the original coast would have cut.

Over the centuries, Faneuil Hall made its place in history. Originally funded by money accumulated in the slave trade, the Hall came to play a role in the country’s greatest social and political movements.

New land has since blended with old, vaguely discernable by slight variations in the straightness of the streets. Boston has become the modern city many know today with glass buildings etched in the skyline, transportation systems that dive under and around the old peninsula, and a metropolitan population that is nearing 5 million.

But this filled land, the foundations that make up approximately 20% of Boston’s city limits, is extremely susceptible to climate change. Rising tides will saturate the landfill and reclaim the land raised by human hands; huge swaths of Cambridge, Back Bay, South End and Seaport will again disappear below the tides.

The shores of 2100 will look remarkably similar to those of 1630. But this time Faneuil Hall and all the history it holds will be on the wrong side of the waterline.

Boston is the eighth most at-risk city in the world in terms of potential losses due to climate-related flooding, according to a 2013 study by the Organization for Economic Co-operation and Development.

Data compiled by Climate Central shows that rising tides will drown nearly 60,000 Boston-area homes and threaten almost $37 billion in property value by 2100, if the worst-case projections from the National Oceanic and Atmospheric Administration are accurate.

Boston’s historic landmarks will soon face a choice: remain, adapt or move. These are options that face every historic site in the battle for preservation, and options that Faneuil Hall has faced before.

In the 1970s, the Hall and its neighboring Quincy Market were in such disrepair that they were set to be demolished. An effort by urban planner James Rouse, supported by then-Mayor Kevin White, improved the buildings’ condition and saved them from destruction.

“Boston’s already lost a lot of its history,” says National Park Ranger Merrill Kohlhofer. The Paul Revere House was in disrepair before a great-grandson saved it from demolition, he said, and the Old State House was almost moved to Chicago when Boston city officials threatened to tear it down. Dozens of other sites, though, have been lost to new development.

But climate change will bring large-scale, sustained environmental threat to Boston’s historic sites. Already, Long and Central wharves — just a few steps from Faneuil Hall — are experiencing extreme high tides at an unprecedented rate with 10 tides of more than three and a half feet occurring in the past decade.

“In order to maintain the rich historic fabric of the city, historic buildings must be able to withstand sea level rise, increasing storm events and precipitation,” reads a 2018 design guide published by the Boston Environmental Department.

“If we were to lose our historic neighborhoods to flooding, Boston would lose its soul and sense of self,” says Alison Frazee, Assistant Director of the Boston Preservation Alliance, which has completed preservation projects on Faneuil Hall. “After loss of life, loss of our irreplaceable historic resources, our identity, would hurt the most. The rest can be rebuilt.”

The guide for historic building resiliency recommends climate adaptation by way of retractable flood gates or barriers that keep sites dry, elevated mechanical systems, water-resistant ground floors or raised first floors. In extreme cases, a threatened building could be raised in its entirety.

“These strategies tend to be very specific to the site and anticipated threats, so there’s not one solution,” Frazee said, adding that her team is working to get the city to understand climate change’s threat to preservation.

But to many, the preservation of the nation’s history is invaluable. According to Kohlhofer, sites like Faneuil Hall make the past tangible, adding a sensorial element to history that can’t be found in books.

“It’s like you can hear the echo of history,” Kohlhofer says. “You’re physically walking in the footsteps of the past.”