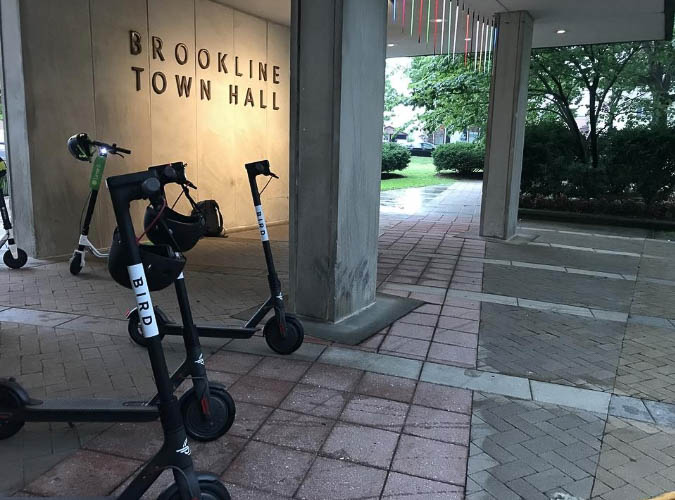 Amy Dong was checking her phone while riding a Lime scooter when she fell and fractured her right ankle. She said she spent almost three months in bed recovering and will never look at the vehicles the same.

“I probably won’t ride a scooter anymore,” she said. “There should be more signs on the road to alert users of the upcoming terrain.”

Brookline became the first town in Massachusetts to implement a pilot program to allow shared, electric scooters on April 1, 2019. The program ended Nov. 15.

During that time, the Brookline Police Department logged six scooter incidents, in five of which riders were injured and over 40 safety complaints via 911 during the period, according to a review of police records.

The complaints addressed a range of problems, including underage riders, riders not wearing helmets, riding on sidewalks, parking improperly and blocking access for wheelchairs on sidewalks.

Todd Kirrane, the administrator for Brookline’s Transportation Division, said the chief concerns at community feedback forums were about the potential for pedestrian accidents on the sidewalk.

“The scooter riders don’t see safety issues in the same way that a lot of the rest of us do,” she said. “It is an experiment that was fraught with people learning the hard way.”

Brookline Select Board member Heather Hamilton said it’s not fair to say scooters are dangerous when the government has not built the infrastructure needed for safety.

Hamilton said there are a lot of car drivers who feel uncomfortable sharing the road. “We have done a very bad job as a society of educating drivers on how to interact with vehicles that are going at a slower speed,” she said.

Interviews with some of those who filed complaints highlight that of safety law enforcement is a primary concern.

Richard Hassman, who lives in Brookline, said he decided to call 911 when he saw an adult and a young girl riding together on a scooter in bare feet without helmets.

He said he never received any feedback from the police after he filed the complaint, which was disappointing to him.

“I think it has been an abject failure,” he said. “The police seem to turn a blind eye on the whole regulations.”

Hamilton said the Select Board has to continue to work with the Brookline police to give them the resources to step up enforcement activities.

“The enforcement is a big question that I’m not sure that we’ve gotten right so far,” she said.

Hamilton said public education would be a good first step, including informing parents that they should not allow children under the age of 18 to ride scooters

All the shared scooters have been off the streets since Nov. 15, Hamilton said, and the Select Board will work with the police department to better understand enforcement activities and injuries.